Kyiv’s Motherland Monument: Secrets and Myths of a Steel Symbol

Blog
Today, one cannot imagine the panorama of the right bank of the Dnieper River in Kyiv without its symbols: the Great Lavra Bell Tower and the huge steel Motherland monument. The latter is one of the world's tallest such structures, ahead of the Statue of Liberty in the US, and has towered over the capital of Ukraine for more than 40 years.

The decision that Kyiv needed a memorial complex commemorating victory in World War II came in the first half of the 1970s. Motherland was designed and created by the Soviet sculptor Yevgeny Vuchetich, who was the author of similar monuments in other cities of the USSR. However, he passed away before he could finish it. After his death, the sculptor Vasyl Borodai continued the construction of Motherland. Thanks to him, it and the entire memorial complex got a modern look.

This impressive steel sculpture is 102 metres tall (including its base) and weighs 530 tonnes. However, it has several secrets that are almost unnoticed in panorama pictures.

For example, the base is not just a reinforced concrete support, but also a five-storey building housing a museum. Visitors will be surprised to know that the monument has an invisible part, which is almost 18 meters deep and makes the structure stable. Museum employees say that Motherland can withstand an earthquake measuring 9 on the Richter scale. Therefore, its underground part is a sensitive area where visitors are allowed in very rare cases. However, practically all other parts are open for excursions. More on this below.

What kind of material made it possible to create such an impressive monument?

Steel! According to historical documents, the metal for Motherland was produced in Zaporizhzhia. Nowadays, there are two independent steelmaking plants in the city. One is Dneprospetsstal, the largest producer of stainless and special steels in Ukraine, and the other is Zaporizhstal Iron and Steel Works, which is part of Metinvest Group and specialises in flat products. They had to combine their efforts to produce material for such a large-scale and ideologically important project: Dneprospetsstal produced stainless ingots and Zaporizhstal rolled them into sheets.

All of the other components were assembled in Kyiv. The result is an all-welded sculpture that is unique according to world standards. It has a steel supporting skeleton, which features in documents on the museum’s website. Generally speaking, it does not differ much from an industrial steel structure and is something similar to a giant transmission tower. This skeleton makes the sculpture robust and stable. From the outside, a plate skeleton and external skin are visible. Between them, there is another invisible layer, namely a joining skeleton that acts as a connector between the supporting and the plate skeletons. Online electronic archives contain detailed drawings of the sculpture, with dimensions and recommendations on assembling and welding its elements.

Notably, steel was not the first choice of material. The initial plan was to install a 90-metre bronze statue on the base. Covering the statue with gold leaf was also considered. However, those ideas were abandoned during engineering, probably due to technological reasons and high material prices. Instead, hundreds of bronze sculptures are now located in the thematic areas of the memorial complex. 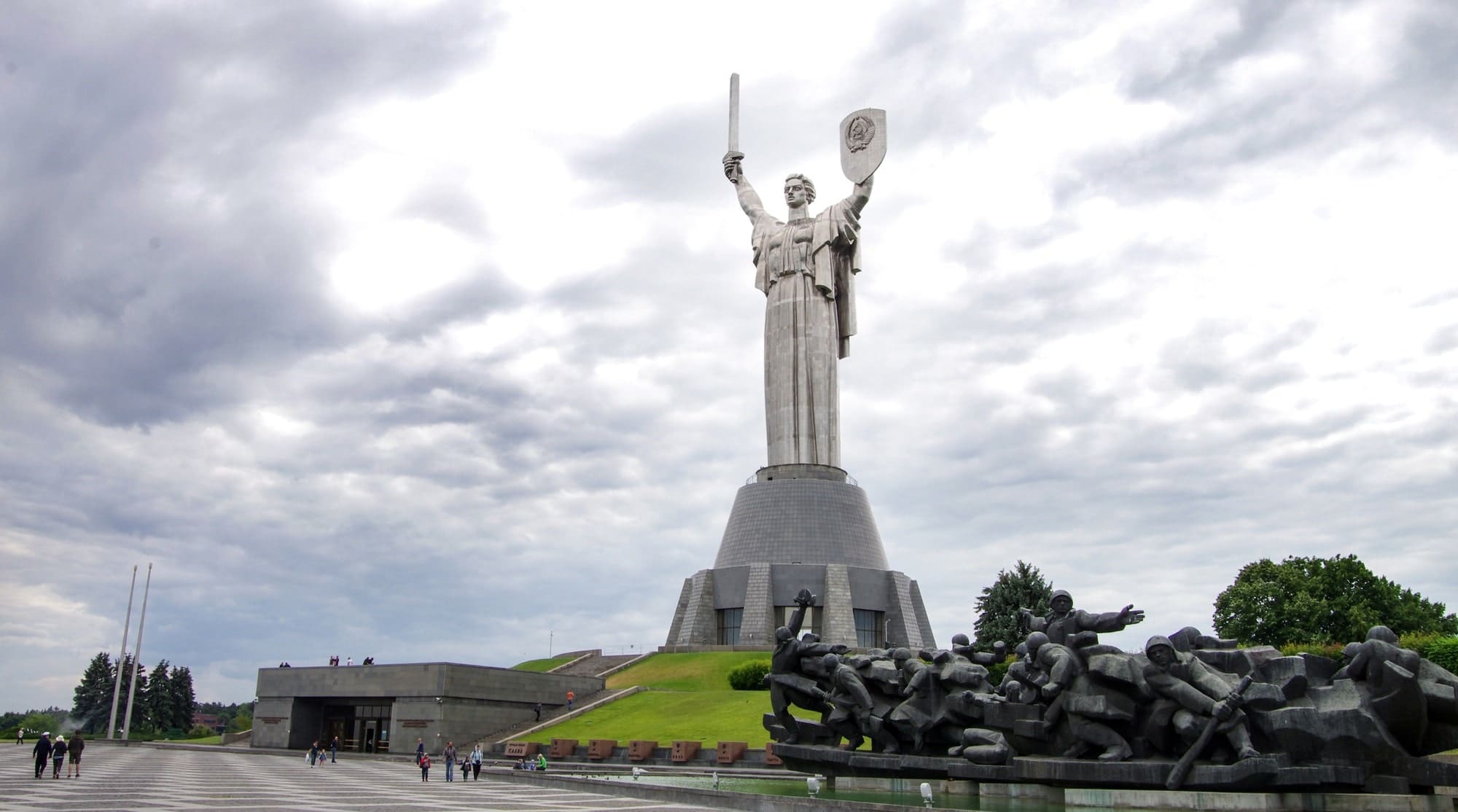 The complex design was developed by the Ukrproektstalkonstruktsiya Design Institute. The blocks used to assemble the monument were produced by Kyiv Experimental Machine Plant (also known as Paris Community Plant) using technology and under the guidance of experts from the E.O. Paton Electric Welding Institute. The plant was located on the western outskirts of Kyiv (near the Akademgorodok underground station today). As such, the blocks assembled there had dimensions suitable for transportation on the capital’s roads.

Final assembly of the monument was carried out on site. To that end, special high cranes were installed. People say that the cranes were cut and thrown into the Dnieper River in the rush before the opening ceremony.

This has resulted in several legends. According to one, during construction, the Orthodox church insisted on reducing the sculpture’s height so that it was smaller than the Great Lavra Bell Tower. Another states that the sword was shortened slightly after aerodynamic tests, which seems more truthful, as its initial dimensions could have damaged the whole sculpture. By the way, this is why the sword is flat rather than diamond-shaped: it helps to dampen wind-induced vibration more effectively at such a height.

This was demonstrated in Volgograd, where the sword of a similar statue needed shortening. The initial structure, which was made of steel and titanium, was subject to strong vibrations that produced unpleasant metallic sounds. As such, the manufacturers made a new steel sword with special openings to reduce the surface exposed to the wind. 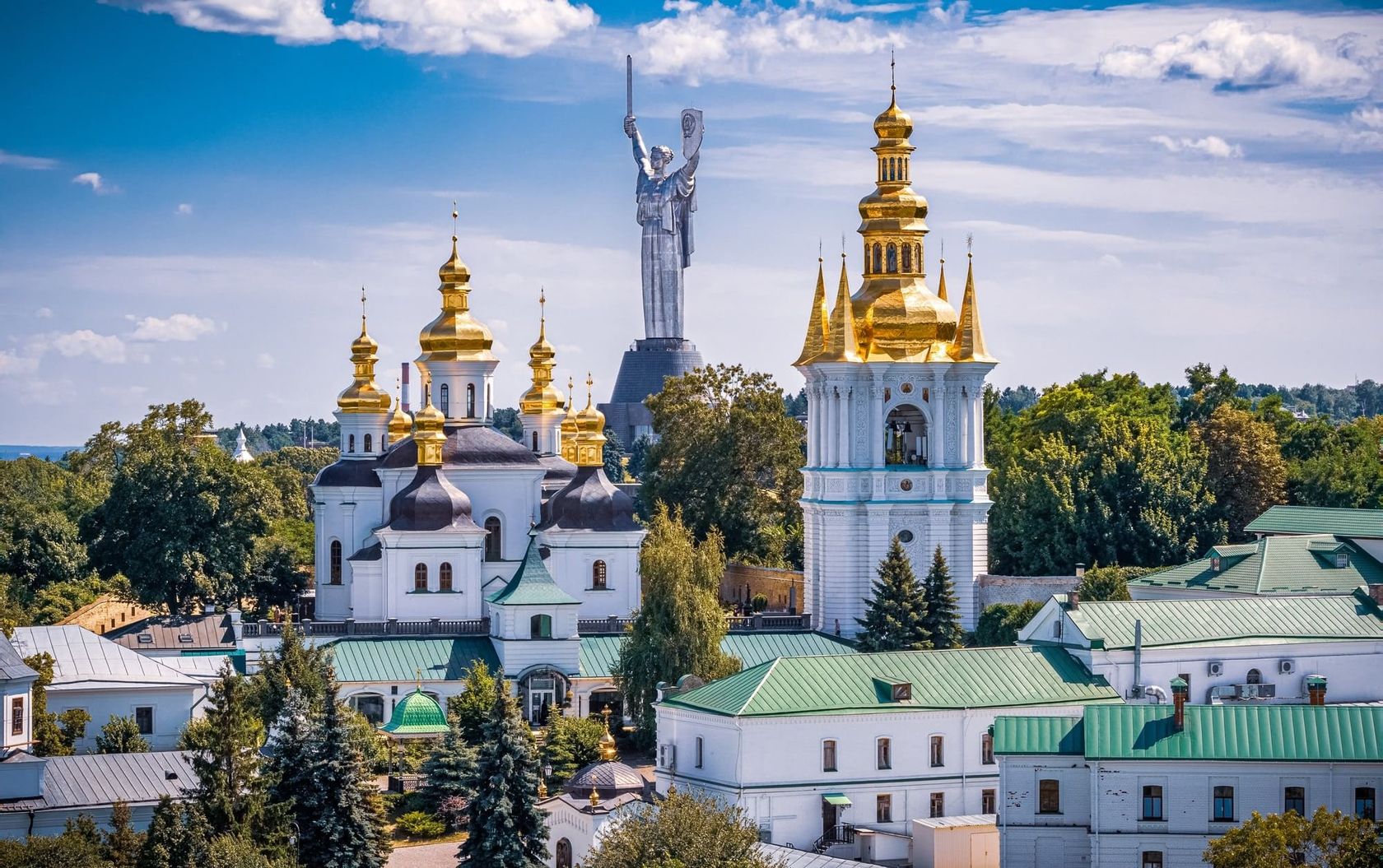 The sculpture can be viewed from not only the outside but also the inside. For this purpose, the museum offers several excursions, during which visitors can go to observation decks located at various levels of the monument.

Inside the sculpture, visitors can see and touch the giant steel pipes and structures, and go up and down in elevators. One goes to the chest level of the Motherland, at around 70 metres, the so-called ninth storey. From there, you can take stairs to the shield to enjoy panoramic views of Kyiv, Pechersk, the Lavra, the Dnieper and the left bank of the capital.

From the shield, visitors can also see in detail the sword in the statue's right hand and the statue's head with a hatch on top. Underneath is another secret: a small retractable crane used to carry out service activities.

Museum employees sometimes call the statue "Galya", as her prototype was the Ukrainian artist and sculptor Galina Kalchenko. 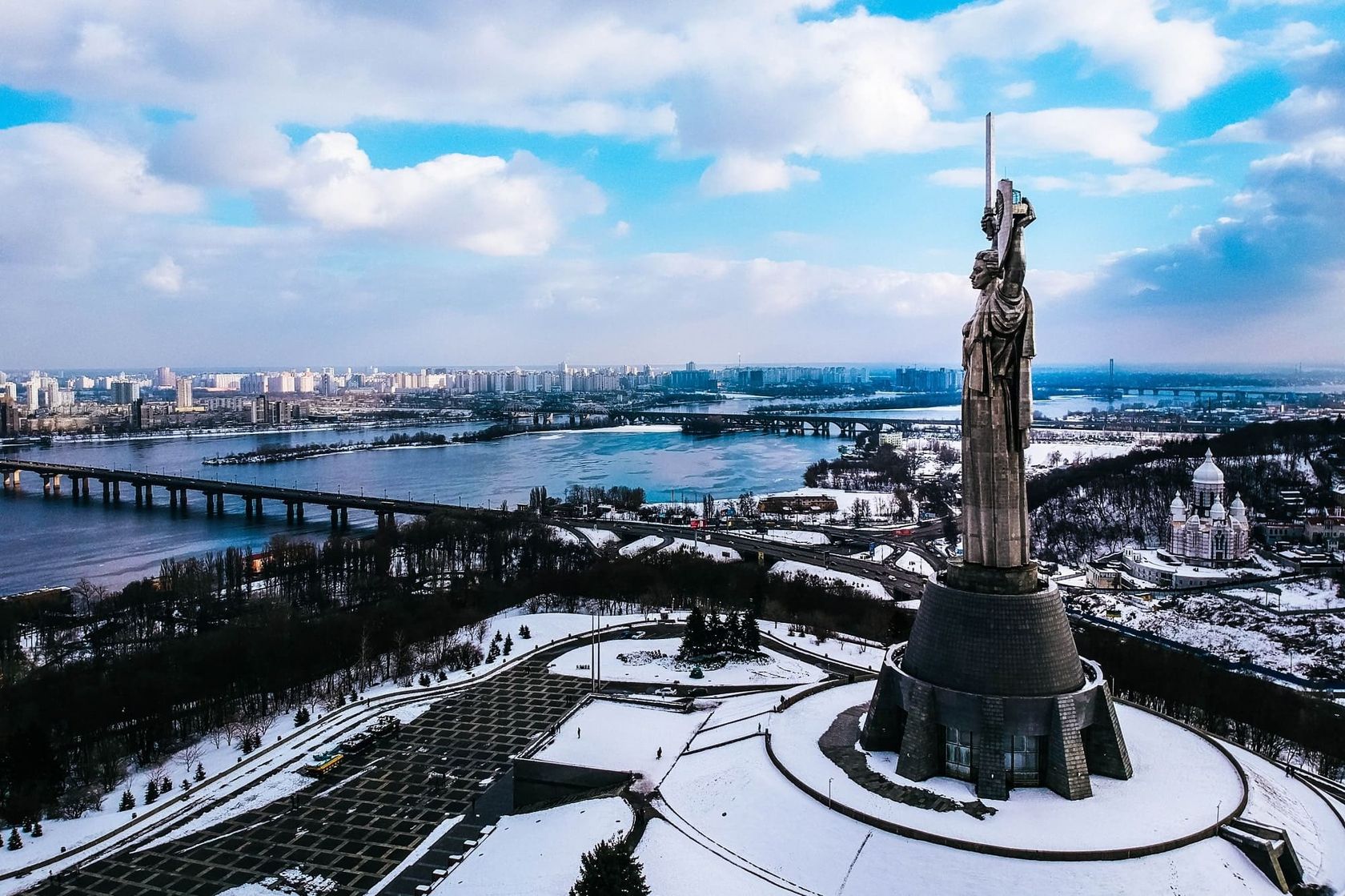 The Motherland monument is part of the memorial complex of the National Museum of History in the Great Patriotic War (1941-45) and opened in 1981. Leonid Brezhnev, secretary general of the USSR, visited the inauguration ceremony, and the museum still has a book with his comments. In 2015, the memorial complex was renamed as the National Museum of the History of Ukraine in World War II. The complex occupies an area of around 10 hectares. It includes a huge bowl with the Flame of Glory, an alley dedicated to hero cities and numerous sculptural compositions symbolising different parts of the war: from the defence of the border to the forcing of the Dnieper. There is also an exposition of historical and modern military equipment.

Today, the memorial complex is a favourite leisure place for Kyiv residents and visitors. More than 21 million people are estimated to have visited it, and around one million people go every year. These are just the official figures!

The Motherland sculpture and its image regularly feature in various art projects. For example, on Constitution Day in 2014, it was illuminated with the colours of the Ukrainian flag using laser projection. In 2020, a 90-metre flagstaff was installed near it. In addition, a copy of the sculpture’s head was a central element of the WOW Ukraine exhibition, which took place in 2019-20 at the central railway station in Kyiv.

The authors and builders of Motherland guaranteed that it would stand intact for 150 years or more! As such, this steel symbol will remain a tourist magnet in Kyiv for a long time.