Blog
Metal traditionally needs protection against corrosion, but sometimes it's just the other way around: Rust itself protects the steel from destruction and makes the alloy more durable. It's about weather resistant steel or in other words - COR-TEN*.

Usually, a corrosion layer consisting of iron oxides is formed on the surface of the metal under the influence of air and moisture. This rust is loose and porous; it helps oxygen penetrate into the deeper layers of the metal and destroy it from the inside.

Metallurgists decided to use natural rusting to their advantage and create a material where corrosion could play a completely constructive role. Rusting of such steel due to the environment promotes the formation of a protective shell on its surface, thereby reliably protecting the core. We’re talking about weather-resistant or, as it is also called, Corten steel. (Cor-Ten is a trademark of the American company U.S. Steel.) It was in the United States where it appeared in the 1930s. First, railroad cars for coal transportation were made of this type of steel so that the cars would wear out less. In the 1860s, they built the first building – the headquarters of the John Deere engineering company in Illinois.

In the USA, weatherproof steel is produced according to the ASTM A242 and ASTM A588 standards and to EN 10025-5 in Europe. The only producer of corrosion-resistant mill products in Ukraine, Metinvest Group, has been producing this product according to the European standard since 2016.

In its appearance and quality characteristics, weather-resistant steel is similar to Corten steel. The Certificate of factory production control issued by the international certification company TUV certifies the European quality of this product. 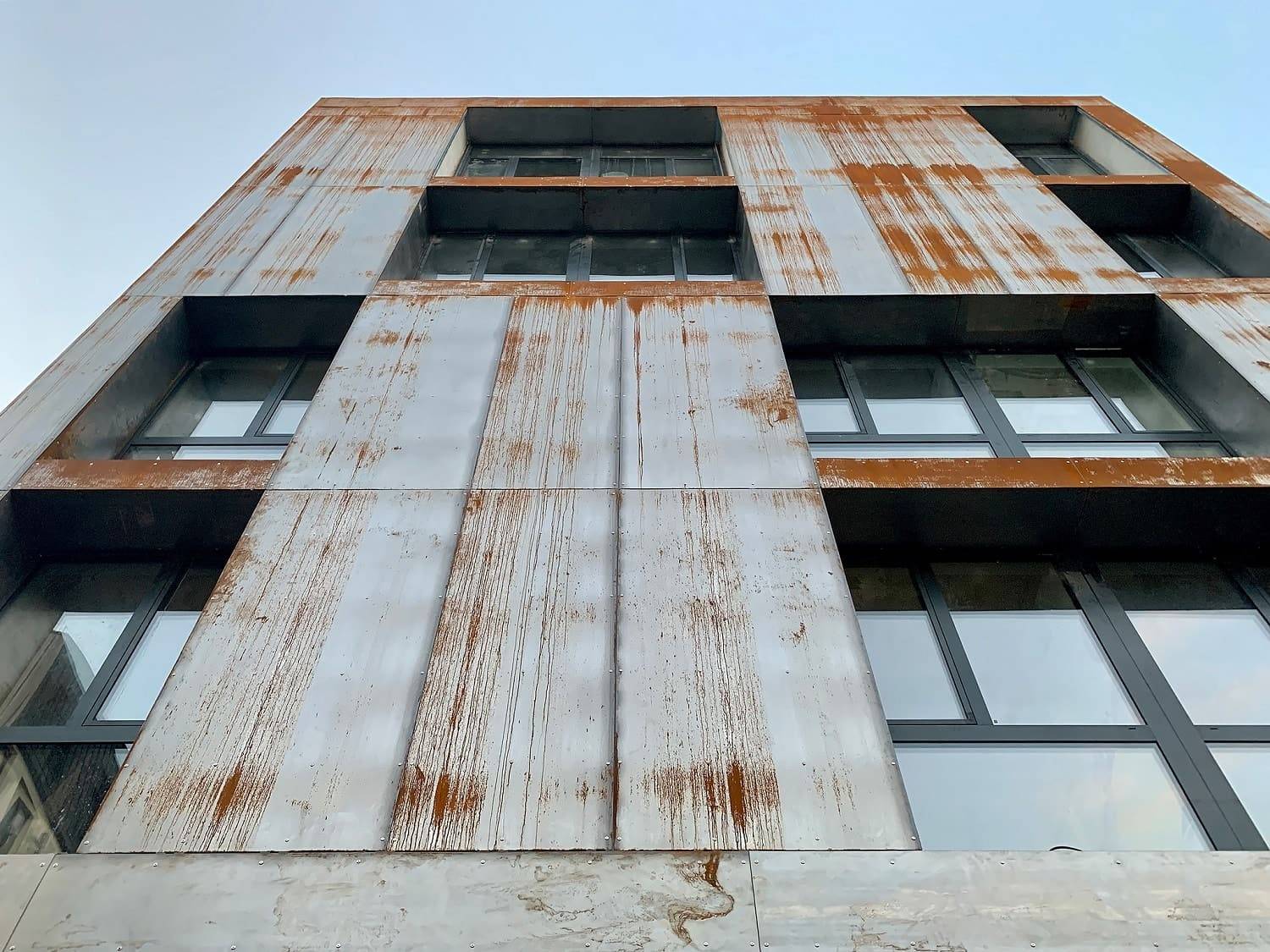 Weatherproof mill products are produced by Mariupol Ilyich Iron & Steel Works and Azovstal, as well as the Italian enterprises of the Group – Trametal and Ferriera Valsider.

Corrosion-resistant alloy steel products are supplied in sheets and coils. For three and a half years, Metinvest has sold more than 50 thousand tonnes of rolled metal to enterprises from 17 countries in Eastern and Western Europe as well as the Middle East. The main volume of production fell for the Italian assets.

Steel anticorrosion properties, according to EN 10025-5, are due to their chemical composition. Thanks to a special alloying of chromium, copper, silicon, and phosphorus, a patina is formed on the surface of a product — an oxide film of a special composition and high density that protects the inner layers from environmental influences. The products made of such steel don’t require painting or special care, which means saving on surface treatment and operation of the structures.

Another feature of such a metal is its colour. Besides, rust on the surface makes the mill products velvety and pleasant to the touch. Immediately after manufacturing, the sheet gradually acquires a traditional steel colour and then different shades. In half a month, the metal turns bright yellow; in six months, red; and in two years, brown. Imagine a building that you’ll never get bored with: It will change over the years, becoming even more attractive.

Corten is a universal material

Scopes of weatherproof products are quite different; it’s used not only in industrial or in civil engineering. Architects and designers, sculptors, and artists appreciate such properties of the material. Red metal increasingly decorates the facades of residential buildings, restaurants, and galleries. From a purely building and architectural material, it has turned into a decorative one. In residential buildings and apartments, you can see the "rusty" walls and furniture, fireplaces and even kitchen facades.

In 2019, an unusual building appeared in Lviv, whose appearance will change over time due to the finish of Corten steel. FEST Hotel, located on 15a Lemkivska Street, is already in operation. The development and implementation of the project were carried out by TRDZ architectural firm. «Corten is an eternal material that never grows old. We like its quality of gradually changing its colour. This helped the building break out of the existing chaos and come into the spotlight»,— says Myroslav Dzvonkivskyi, the architect of the TRDZ  bureau, designer of the FEST Hotel construction project.

Increasingly, this metal adorns the buildings of megacities and becomes a design feature. Just as a chronicler, Corten steel reflects the inexorable course of time in sheets of brown.

* COR-TEN is a registered trademark of United States Steel Corporation.