The world is switching to clean energy. Wind energy is considered one of the lowest-cost ways to generate electricity. According to the Global Wind Energy Council (GWEC), in the past year, wind power capacity exceeded that of fossil fuels for the first time in many developed and emerging markets.

Over the past five years, wind energy capacity has grown by roughly 50 gigawatts a year. Today, all the world’s wind farms generate 591 gigawatts of electricity. GWEC expects another 300 gigawatts to come online globally in the next five years. 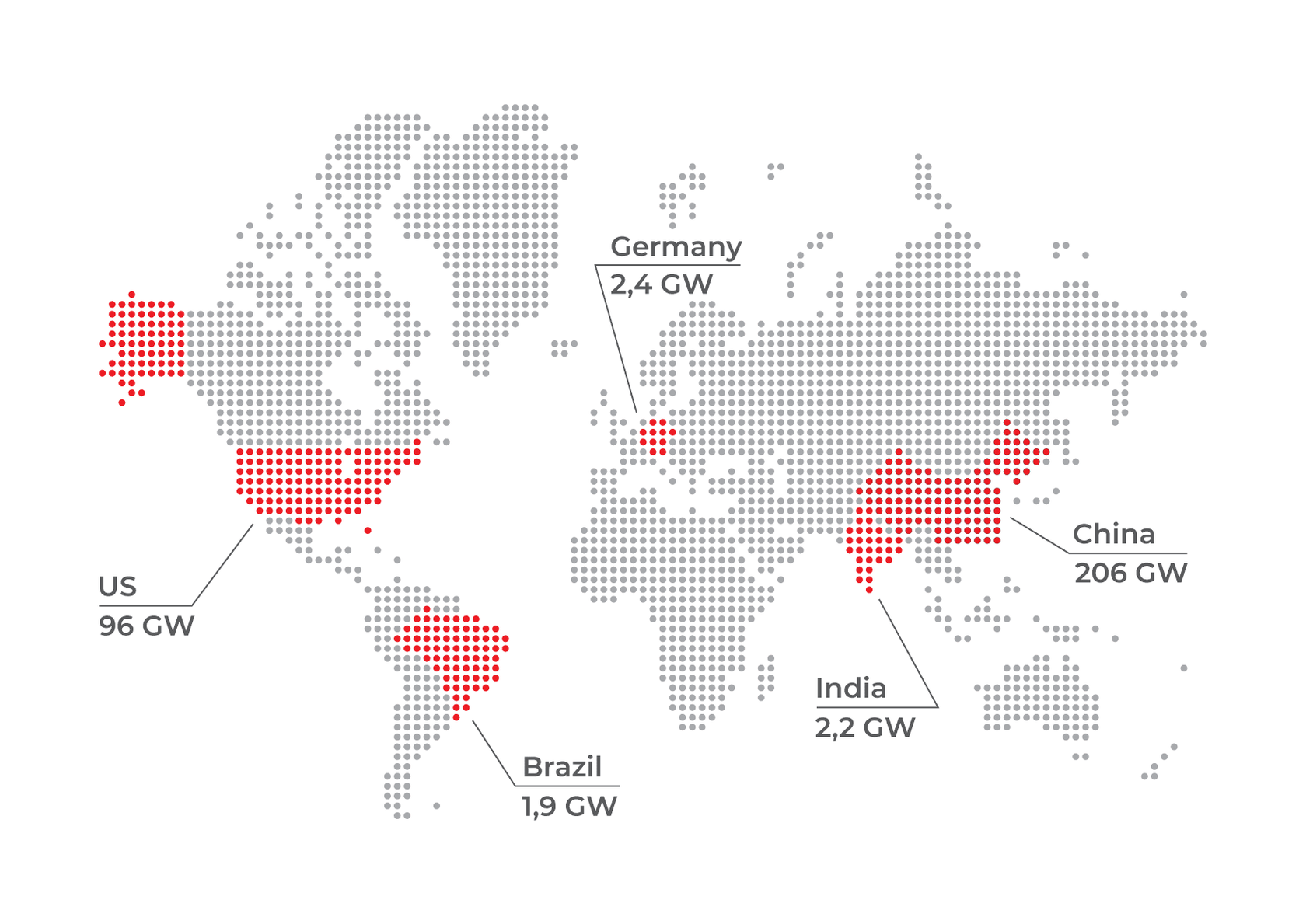 Number two in Europe and Ukraine

Wind energy is Europe’s second-largest energy sector. Wind farms in the EU generate around 180 gigawatts of energy. This is nearly half of all European energy capacity. According to Wind Europe, wind energy could surpass the natural gas industry this year. In 2018, Europe commissioned wind power plants with a capacity of almost 12 gigawatts. Of all power generation facilities built last year, 95% use renewable energy. Meanwhile, natural gas, oil and coal are losing ground: new gas and coal production facilities in the EU have reached record low levels.

Each year, Europe invests billions of euros in green energy. In 2018, a new record was set for financing wind energy projects with investments totalling nearly EUR27 billion. The largest investors were the UK and Sweden. Ukraine, with EUR1.2 billion, was in the top ten in terms of green energy investment. 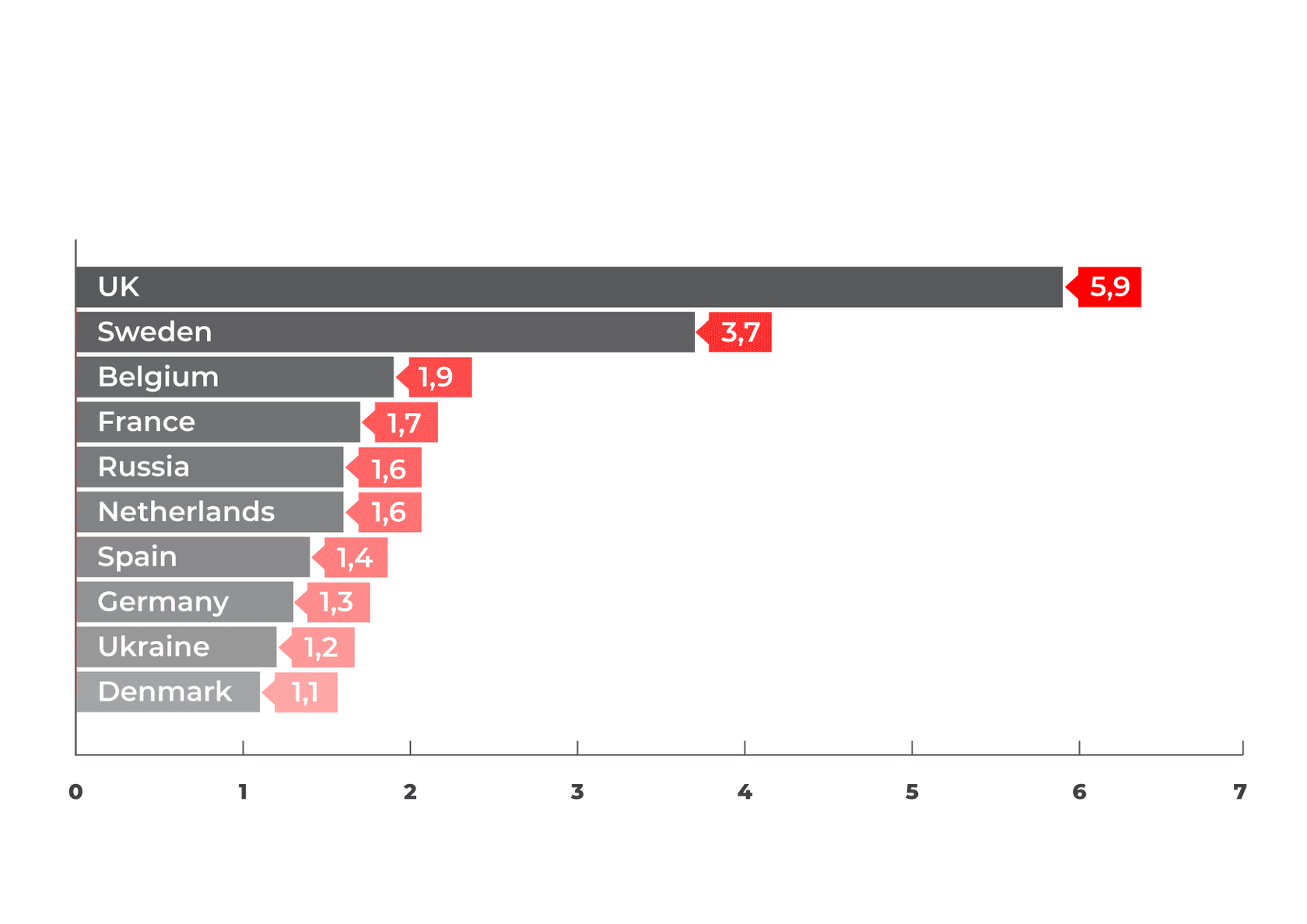 In the first half of this year, Europe built wind power facilities with a total capacity of nearly 5 gigawatts. Ukraine was among five leading countries. 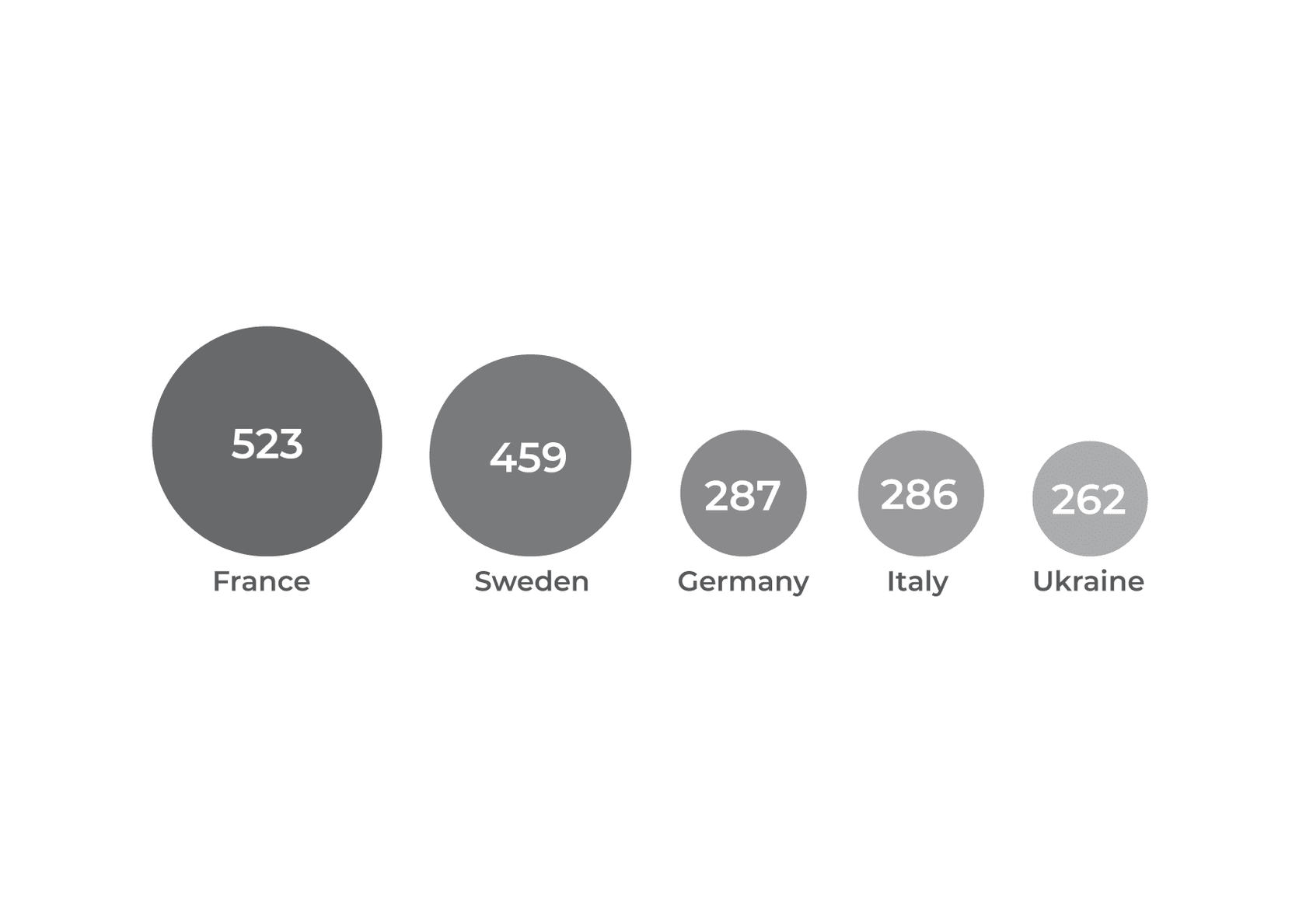 A wind farm consists of several wind turbines integrated into a single network. The largest wind farms are in China, India and the UK. For example, in China’s Gansu province, there is a whole complex of wind farms with a total capacity of nearly 8 gigawatts that could compete with the largest nuclear and hydroelectric power plants.

A wind turbine converts wind energy into electricity. According to Wind Europe, the average power of a wind turbine ranges from 2 to 3.6 megawatts.

The world’s most powerful wind turbine is installed off the coast of Scotland. The turbine’s blade diameter is 164 meters, greater than the wingspan of any aircraft, and its height is 191 meters. It has a capacity of 8.8 megawatts. The energy from one turn of the wind turbine’s blades is enough to power an apartment all day.

A wind turbine’s structure weighs hundreds of tonnes, its mast is made of heavy plate steel  and its foundation is reinforced with large-diameter 20-32 mm rebar. A single foundation can use 60-130 tonnes of rebar. The alloy of the steel makes the windmill durable and stress resistant.

Metinvest’s Ukrainian and European facilities provide steel to manufacturers of wind turbine towers and nacelles  with a width of up to 3,300 mm and a thickness of up to 200 mm produced in accordance with the leading global standards. Almost all the material is structural-grade steel sheet, predominantly S355 . More than half of the steel undergoes ultrasonic quality control to ensure the required material continuity for further assembly. In 2018, Metinvest supplied 68,000 tonnes of hot-rolled sheet to wind tower manufacturers. The majority of the products were made by Trametal, the Group’s Italian facility. 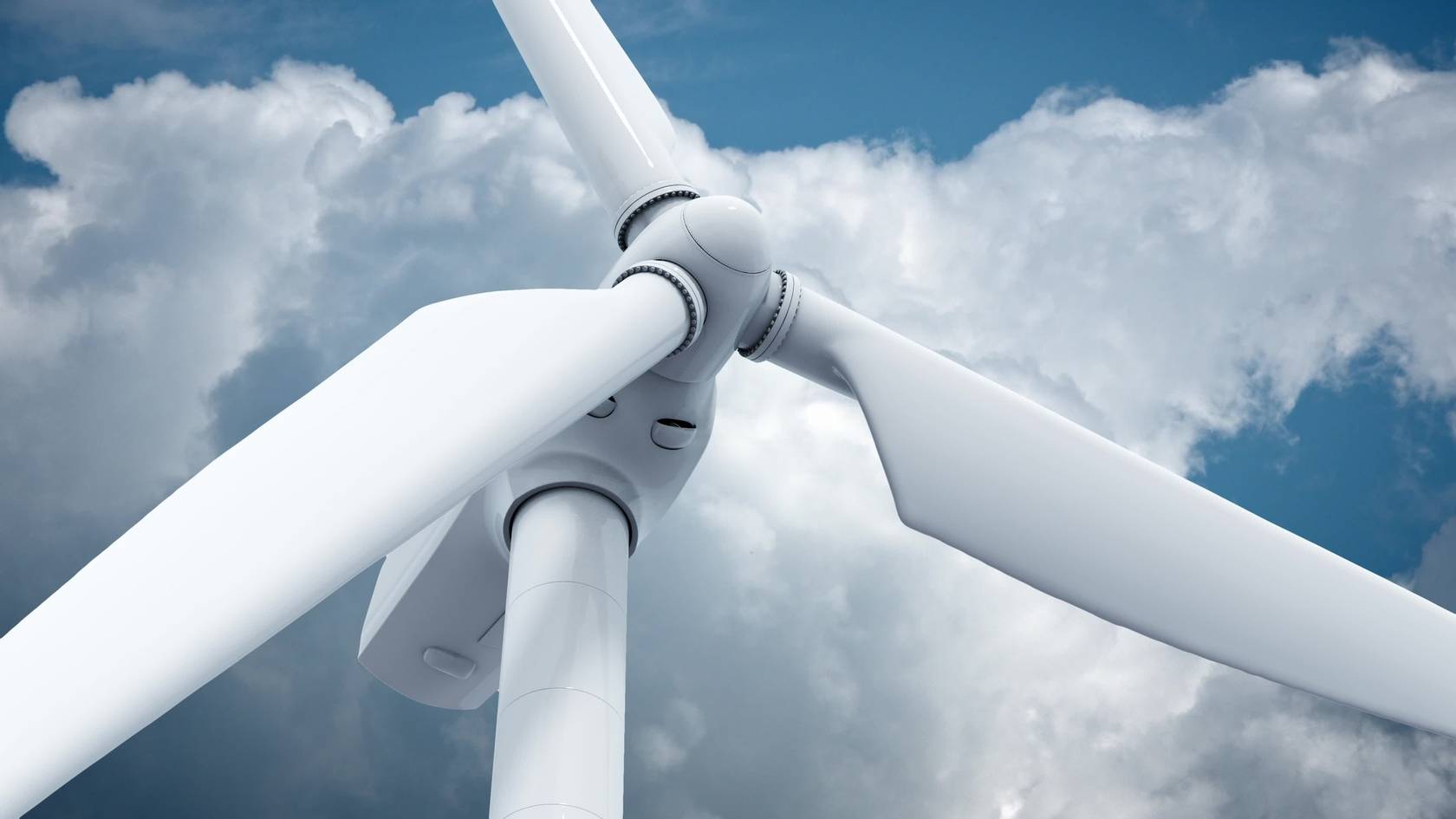 Metinvest is involved in wind energy products around the world. Italy, Spain, Portugal, Germany, Israel, Turkey, Jordan, Egypt, the US and Ukraine: this is just a partial list of the countries where wind farms made of Ukrainian steel have been built or are under construction.

Metinvest’s customers include a global leader in the wind energy industry, Siemens Gamesa. Azovstal supplied around 3,000 tonnes of heavy steel sheet  for the construction of a wind farm in Poland. A subcontractor on the project, the Polish company GSG Towers, is using it to make wind towers.

This year, Siemens conducted an audit of Azovstal and certified the plant’s production. This means that Metinvest has become Siemens’ Ukrainian partner and can supply products for the company’s other projects.

The wind farm is in Barwice, north-western Poland. The project includes the construction of 14 wind turbines with a capacity of 3 megawatts each. The plant’s total capacity is 42 megawatts. Construction began in March 2019 and the wind farm is expected to be commissioned in February 2020. The wind farm will generate around 112 million kilowatt hours of electricity a year. This is enough to power around 27,000 homes.

Wind farm on the island of Petalas, Greece

In western Greece, construction is underway of a wind farm comprising 24 towers with a capacity of 2 megawatts each. The wind farm will be managed by Protergia, the energy division of Mytilineos, Greece's largest electricity producer.

The project’s wind turbines are being manufactured and installed by one of the world's largest manufacturers, the Danish company Vestas, to which Metinvest has delivered 500 tonnes of rebar..

On the Ukrainian market, wind turbine towers are made by the Kramatorsk Tool Making Equipment Plant, which together with Fuhrländer Windtechnology offers the full cycle of wind turbine production.

Over the past year, Metinvest has supplied more than 2,500 tonnes of hot-rolled plate produced by Azovstal for the manufacture of wind power plants in Ukraine.

The wind farm near the village of Yasnohirk, which is not far from Slovyansk , will consist of 15 turbines. Each wind turbine will have a capacity of 4.5 megawatts, enough electricity to power around 3,500 homes. Construction of the wind farm began in the fall of 2018. The first stage envisages the installation of three wind turbines.

The Ochakivskyi wind power facility includes two wind farms, Ochakivska and Tuzlovska , with a total capacity of 37.5 megawatts. The wind farms are located on three fields with a length of 16 km. The plan is to increase the facility to a total of 150 wind turbines with a capacity of 375 megawatts.